British design company LINLEY was founded by David Linley in 1985.
David’s creative ability was nurtured by his parents from an early age. His father, Lord Snowdon, both eminent photographer and architect, was particularly influential encouraging David to explore construction and design. David’s mother, the late Princess Margaret, sister to Her Majesty Queen Elizabeth II, also encouraged his creativity with her passion and talent for music and art.

As a boy, David developed an avid interest in wood-working, later honing his professional skills at the Parnham House School for Craftsmen in Wood. His genuine passion and skill for cabinet-making led him to found David Linley & Co, a company specialising in the creation of unique, bespoke pieces of furniture. The abiding philosophy and brand ethos was – and remains – superlative craftsmanship, distinctive design and exemplary service. These elements form the building blocks of the brand’s DNA and heritage.

The first collection David Linley & Co launched commercially was unveiled in 1985 at Christie’s in London. Retail premises were then opened on the New Kings Road and in 1993 the shop moved to Belgravia in London, where the flagship store remains to this day.

Some 26 years on, the now a well established British design company, LINLEY enjoys prominence as both a retail and bespoke business specialising in the design and production of furniture, upholstery and interior schemes as well as gifts and home accessories of a superlative quality.

The company has built up both a national and international presence with a significant international customer. Bespoke commissions and projects have ranged from individual domestic pieces such as dining tables, games tables and jewellery boxes to entire interior design projects - both exclusive privates residences and commercial ventures such as Claridge’s and the Kempinski Baltschug in Moscow.

LINLEY also makes furniture for private yachts, private jets and corporate projects, working with leading designers such as Andrew Winch, Bannenberg and Rowell, Peter Marino and Ralph Lauren to name a few.
There are currently two LINLEY shops – LINLEY Belgravia (60 Pimlico Road, SW1) and LINLEY Mayfair (46 Albemarle St, W1). In 2010 a store was opened at Harrods London. LINLEY also has a strong and growing e-commerce business selling gifts and accessories around the world. 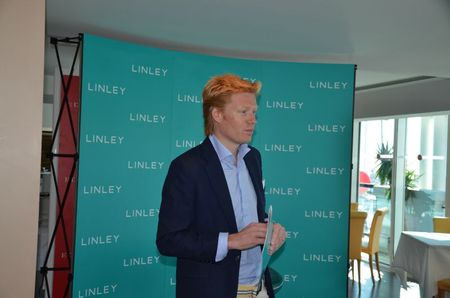 As 2012 approaches, LINLEY is moving into the next exciting stage of brand development and strategic expansion under the new leadership of Jamie Edmiston.
As a major shareholder of Linley, Jamie Edmiston will work closely with Chairman David Linley to take the LINLEY brand into the international arena.

The essence and values of the brand will remain consistent, drawing on Linley’s expertise and skills of craftsmanship and design. Strategic initiatives in the first stages of restructuring will include:

• Redeveloped brand identity reflecting the bold, contemporary direction the company is now taking
• Refurbishment and relaunch of the LINLEY flagship store on Pimlico Road, Belgravia
• The launch of the LINLEY Bentley collaboration - a limited edition of 10 Continental Flying Spurs.
• Unveiling of a business plan outlining strategic initiatives, global expansion plan and product development focus.
Jamie Edmiston quotes: “LINLEY craftsmanship and the quality of work is without question world class – the attention to detail and the passion that goes into each product is a clear differentiator, and the passion that David has for design and craftsmanship still rings clearly throughout the company. This quality of workmanship, combined with the provenance of the LINLEY name has ensured that the brand is extremely well respected and recognised – there is no doubt that LINLEY is one of the great British brands – however, I firmly believe there is enormous potential to grow the brand both in the UK and internationally. I have huge respect and admiration for brands such as Louis Vuitton and Hermes, and my clear aim is to ensure that the LINLEY brand is recognised in the same vein as these within the next five years. I am of course realistic and don’t expect this to happen overnight, however, I am a firm believer that we should aim high”. 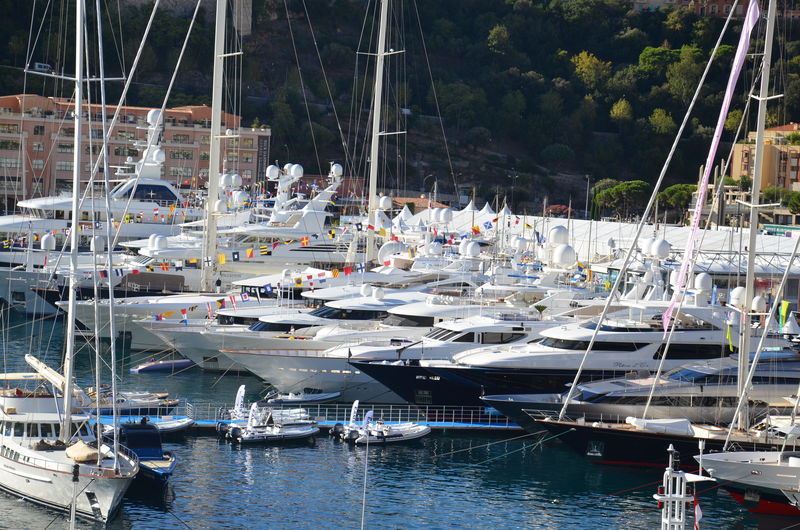 The internationally famous and glitteringly gorgeous event was buzzing with wealth and business excitement. More than 100 superyachts, with over 40 making their worldwide debut, lined the docks inside Port Hercules from. They set the tone for what was perhaps the most successful show in the events 21 year history.

28,200 visitors, slightly up on last year’s attendance, came to view superyachts from 25 to 86 metres.

This year’s large yacht line up included: Steven Spielberg’s Seven Seas (86 m), Cakewalk (85 m) the largest on display this year and Imagine the high volume 64 metre yacht from Amels. Prima the brand new yacht from Columbus Yachts was one of a handful of yachts from builders who have never built a yacht before. Adrenaline junkies loved Shooting Star a superfast 38 metre superyacht from Espen Oeino and Danish Yachts while sailing enthusiasts crowded around Hemisphere to catch a glimpse of the world’s largest catamaran built for luxury cruising.

Yachts for sale included Big Fish one of the most dramatically designed discovery yachts that has, since her launch last year, already explored the globe and visited Antarctica.

Proving the business prowess of the Show, a 42 metre Turkish built superyacht sailed into the show as Nomade and departed with her new name Bar Tender painted on the stern having been sold during the show. The Dutch builder Jongert used the show to conclude the signing of a contract that will see them build a 46 metre motor yacht designed by Dubois.

Exhibitor displays were equally important to visitors. This year Monaco afforded the industry the most spectacular selection of things to see. More than 500 industry leaders exhibited luxury products, services and facilities and then Show provided the essential opportunities for industry professionals to network.

Confidence was high that the superyacht industry was sailing forward towards a bright horizon despite the gloomy world economy. The real benefits the Monaco Show will bring to exhibitors that attended are only determined over the weeks that follow the event, but many left the show on a high, enthused by the quality and quantity of enquiries.

Miriam Cain, Communications Manager, Camper & Nicholsons, UK said, “At this year’s Monaco Yacht Show we welcomed a large number of existing and new clients. All our yachts on display received good interest, and the feeling is that the market overall continues, albeit slowly, to improve.”

Billy Smith, Vice President at Trinity Yachts knows that the Monaco Yacht Show always brings solid inquiries. He said, “Interest level seemed to be up from last year. Of course, while we are at the show expressly to showcase our custom superyachts, we appreciate the opportunity to network at the many fine events which run concurrently throughout the show.”

Hein Velema CEO Fraser Yachts in Monaco was equally enthusiastic saying, “2011 at Monaco has seen a positive Show with plenty of qualified buyers, serious discussions, realistic prices and positive negotiations. Success at boat shows is never immediate and we have to study the reports of our brokers, but they were all kept extremely busy with qualified client viewings and consultations throughout the four days.”

Toby Walker, Director of Sales, with Dubois Yachts added, “We certainly now have pending
negotiations started during the Show and we will continue to work on them to hopefully bring them to fruition.”

Alev Karagulle Director of Marketing and Communications at Burgess said, “We have every reason to believe that Monaco Yacht Show 2011 was a continued improvement to recent past years and will prove to be a key event in supporting our successful performance in this challenging market environment.”

Paul Cook, Operations Director at the electronic supply and fit firm: ANT said, “MYS 2011 reflected a feeling of positivity that despite the continued economic and political turmoil there was an air of genuine confidence within the Superyacht industry. We enjoyed the busiest Show ever with many new clients inviting us to be involved in different projects and current clients applauding our continued efforts to deliver proven cutting edge technology that suits their desires and needs.”

For most exhibitors and visitors alike the Monaco Yacht Show is the most successful show in the world’s yachting calendar but what makes it special are the events every day: charity auctions, prize giving, lunches, gala dinners and cocktail parties. These take the occasion into a class of its own without equal. As in previous years, Monaco Yacht Show organisers pledged a continuing support for Association Monégasque contre les Myopathies, a locally based charity with the organisers again donating 50% of all entrance ticket sales (EUR 52,700 this year) and co‐organising the 4th edition the world renowned

Only Watch charity auction at Hotel Hermitage. This year, the once every two year
event of 40 one‐off Swiss luxury watches closed with an outstanding result of EUR 4,563,000 that benefits research into Duchenne Muscular Dystrophy.

The Monaco Yacht Show also continues its previously pledged support for Wood Forever a
programme backed by His Serene Highness Prince Albert II and one dedicated to fighting world deforestation. This year a donation of EUR 40,000 was made by the Show organisers. The money will be used to better educate those involved in the yachting that only wood certified as originating from sustainably‐managed forests should be used in construction, if deforestation is to be halted.

The Show was also the occasion for Wood Forever to formalize the support of SYBAss and the new commitment of the US shipyard Burger Boat as very first member of the programme.

In association with Monaco Yacht Show, the RINA classification society presented the Green Plus Yacht certificates 2011 to Prima (2011/53.90m/Palumbo shipyard) and Numptia (2011/70m/Rossi Navi shipyard), two yachts whose construction meets with compliance of the strictest environmental regulations. His Serene Highness Prince Albert II made the award to the yachts builders in the company of his guest; His Royal Highness King Juan Carlos of Spain who joined him on his tour of the show.

Clearly the 21st Monaco Yacht Show overstepped the expectations of the industry, breaking the records of the event’s history.